- All rise. The court is in session, Hon. Judge Harvey presiding in State vs. Alcor Art Studio on charges of reckless spending and endangerment of personal finances.
- How does the accused plead?
- Not guilty, your Honor.
- On what grounds?
- It was a complot, your Honor.
- Interesting approach. Where is your counsel?
- I do not have one, you Honor. I could not afford one. I will do my best to defend myself.
- Are you a lawyer?
- http://www.blogger.com/posts.g?blogID=8945920546145690381No, I am not. I am an artist wannabe.
- Hmmmm ....So you are accused of reckless spending and endangerment of personal finances because you exceeded the monthly spending budget. I see here you committed to maintaining a healthy balance of spending and a monthly budget. you have infringed this commitment repeatedly. A repeat offender?
- Your Honor, please allow me to explain ....
- Enough! No need to explain, the proofs are irrefutable. The jury will be instructed to consult the account statements in court’s possession. I see here that you were brought to court following a shopping spree this past Saturday at Omer DeSerres. Do you care to explain?
- Your Honor, it was a complot.
- A complot?? Are you trying to make matters worse? Are you mocking the court? I have never heard such outrageous statement.
- It was never my intention to outrage the court. Allow me to explain. It is true I went to the store. But my intention was to purchase a limited number of pastels, maybe three or four, and try them in my studio first. I was planning to paint few faces and see if I liked the results. I found above mentioned pastels on sale as the store is discontinuing the product. Applying good judgement, I bought only 2 colors to test at home, which I did. It was not love at first sight, your Honor! You can see here. May I approach the bench? I would like to introduce defence proof nr. 493-995.
- Any objections from the State?
- No, your Honor.
The judge invited the accused to approach the bench and present the proof. This is what was presented to the judge: 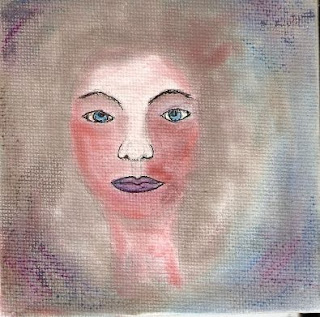 The accused regained her place and continued:

-          As you can see, your Honor, than can hardly be considered a successful attempt! I tried the next day, with the same piteous result. But I do not give up easily. I thought that maybe my lack of skill is to blame for the poor result, so I went looking for information. Information from people who are better than me so that I can learn from the pros. The second attempt was as bad as the first one. But then, on the third attempt, your Honor here is what happened. May I approach?

The accused approached and presented the second proof: 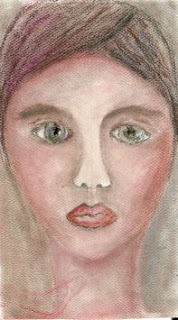 -          It is at this time, your Honor that I considering purchasing more colors. With due diligence, I researched my alternatives. On line availability of the product is scarce in Canada. Only 2 retailers carry the product, as the third one is discontinuing it. The other retailers sell the product twice and even three times more. Purchasing in the US is not an option as I would have to pay duty on top of the higher price. This is when I decided to purchase the set of colors.

-          So your defence is what?? That you spent money to avoid spending more money?!? Are you making fun of the court, accused?! You were expected to show maturity and common sense. You knew you were infringing the law, but you went ahead and did it anyway, and now you want the court to believe you did it because you wanted to limit the expense???

After what turned out to be the shortest deliberation, only five minutes, in the history of the local tribunal, the jury came back with the verdict.

-          Very well. Thank you for your time. The jury is dismissed. I will now pronounce my sentence. Considering the proofs brought to the court’s attention and the rather ineffective and even outrageous defence line stating that the accused was the victim of a complot from other retails, who discontinued the product or are selling it for a higher price, I therefore sentence the accused to one year no art- relating spending. The accused is to submit for psychological evaluation and counsel. And if found to repeat the behaviour, the accused will be sentenced to jail time. The court is adjourned.

This resumes my intro to Pan Pastels. I also corrected some of the mistakes on the second attempt. 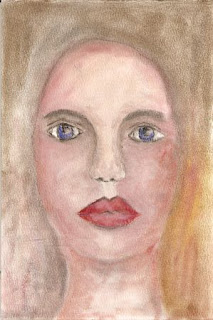 They do not release dust as my Sennelier do. I suspect that is
because the dust stays trapped in the tools. They seem to be easier to use that the sticks. I hope I  will
find a way to use the Sennelier in the mix. I think they can be used with a wet brush too. Probably
grind the sticks, I could use the powder could be used for washes; someplace I think I saw that the
powder should be used with a mix of alcohol ans water. Not sure what that is about. If anybody knows, I'd love to hear from you.