Why Guatemala you might wonder ... It sort of happened. I wanted to perfect my Spanish; I started checking countries that offered homestay and Spanish immersion courses, but the prices were higher. I started reading about Guatemala and in the end, I decided to take the leap. This does not mean I was not concerned. I was. I usually go in an all-inclusive resort and do not wonder on my own. Now, I wanted to break this "rule".

So, after much to-and-fro I finally booked the ticket. And as luck would have it, few days later Pacaya erupted. And then Agatha hit. Disaster! What was I supposed to do now? I contacted American Airlines to see what happens with the flights; I contacted my school in Xela to check how things were; I contacted the bus line to make sure the buses run; I contacted Inguat to have the latest on the weather. Then, I packed and left at 3AM on a Saturday mid-June.

The flights were uneventful; I flew via Miami. I was surprised when I landed - the airport was big, new, clean ... and empty. I think we were the only flight that landed at that time. I had booked a room for the night at Dos Lunas ; the package included transfer from the airport and from the hotel to the bus. So I safely arrived in Guatemala. This is what I found at the hotel: 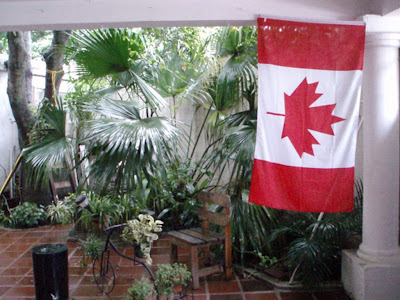 Of course, there were other flags, but I had a strong patriotic feeling that evening...
Posted by Mona at 8:29:00 PM
Email ThisBlogThis!Share to TwitterShare to FacebookShare to Pinterest
Labels: travel
Newer Post Older Post Home