Of shoes and selfies

At the last sketching meeting I met a fellow sketcher who told me she set for herself very simple daily goals. She does 3 3-min quick sketches every day - something real, something imagined and a face (ok - the three topics might be different but that is the idea). I have not implemented the idea yet, but I like it. I think part of the difficulty is that I do not feel inspired by anything that surrounds me - and yet again the internet is full of. nice drawings of mundane objects.

Yesterday I tried a variation of the exercise. I took a break from work and decided to do some selfies. Doing them live is usually a quick process because I cannot keep the pose for too long, especially if I am trying different facial expressions.

I used the Noodlers flex pen, a brush and a red tri-tone pencil. The last one was done with the left hand and all of them are almost blind (I was not wearing glasses so I could not see the paper clearly) and mostly continuous line.  The first one make me think about a severe gouvernante in a English novel from the 1800s, The second one looks like somebody fond of partying...characters in a story. Especially hard to hold a 3/4 pose in front of the mirror - each took around 3 min or maybe less. 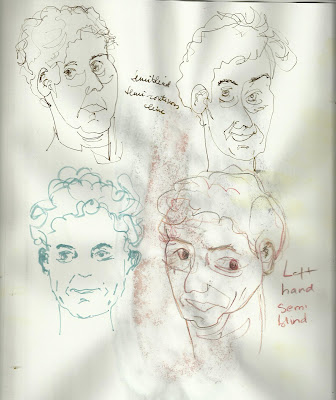 In the evening I wanted to do a quick 20 min sketch, which turned out to be more like 1 hour. I found a list of drawing topics on the net and I decided to work my way through it. First topic - shoes. 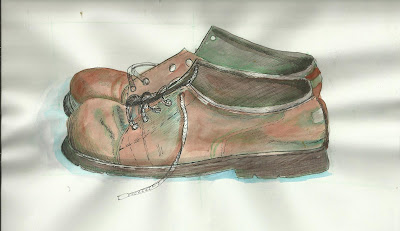 The plan was to use only dry media, preferably pen only, so I chose the drawing pad with thin paper. But I run out of patience tying to add some shading with pen only and switched to opaque watercolors in the end.
Posted by Mona at 7:31:00 AM
Email ThisBlogThis!Share to TwitterShare to FacebookShare to Pinterest
Labels: Sketches
Newer Post Older Post Home