This past weekend was a long one and I decided to play with the abstract painting concepts outlined in Laura Reiner's book.

First attempt: use one's name as a starting poing for absract composition. I used a piece of watercolor paper with the background already painted and I wrote down my name, then extended lines and filled in the spaces and ... voila! I enjoyed the procsess. The final colors are a bit too dark, but the background was dark to begin with. 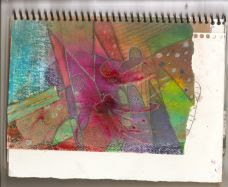 Second try: use of a cross pattern as a layout for the composition. I used all 5 shades of Golden reds by applying washes of various intensities and created the cross shape. But then, while I was trying to figure out what next, I "saw" two eyes staring at me from the white spots left on paper. So I used different lines formed by the shades of paint and this is what I came up with: 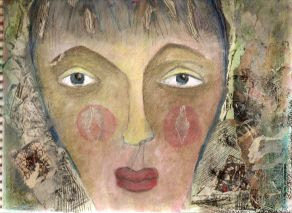 And finally, using a picture as a source for an abstract painting. I think I made a mistake in starting it as an abstract but then trying to squeeze realism into it. I used a postcard from the Grand Canyon as inspiration. 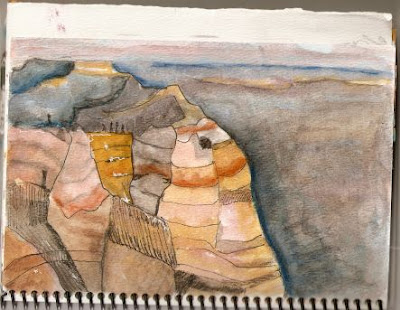 I used to think abstract painting is "easy" - after all it is only lines and squares and rectangles and blobs of color... Hmmm ....I reconsidered the preconception (false false false!!!). There might be squarea and blobs, but figuring out how to place them so that the whole makes some sense it is not always easy, I would think.

Another experiment was using a photo from a amagazine as an underpainting for a portrait. I used Sarah Jessica Parker - believe it or not. An advertisement for some face cream or something. I worked in my altered book journal. After I glued the face, I applied matte medium and then gesso diluted with a bit of water. I was after a different final effect which I cannot explain but I know I will know when I get there. 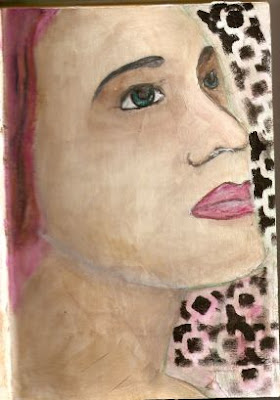