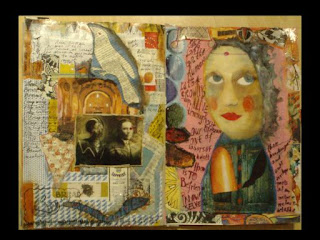 The left page just happened, as they usually do. I wanted to use some of the security envelopes I saved. To that. I added various bits and pieces that just happened to be lying around. The postcard in the middle is the chapel at O'Cebreiro. This is on the way to Santiago de Compostella, in the mountains on the border between Galicia and Castile. It is hard to see, but under the woman's face there is a small picture of Josephine Baker wearing her feathers. I love the contrast between the stern  faces and the image of a famous cabaret dancer from 100 years ago.

The right page is where I channelled Teesha Moore. It is probably the first time I make solid borders like that. I could feel an internal rebellion going on as I was going around closing every gap. There was no way to escape anymore, everything was "in the box". I contemplated painting over, but that would have defeated the purpose of the experiment. I used a fotocopied image as focal point and I decided to paint with oil paints! Of course, it took one week before the page was dry. And somehow I stumbled on a quote that fitted nicely with the image. Unfortunately, I do not remember who the author is anymore. Now, I feel better about borders as they can also be a mean of protecting what's inside the box. All this to say that I might use borders like this in the future.