Last week, there were many. In fact, everything turned out wrong.
First, the bread. I made the Anadama bread from Reinhart's book and it was un-eatable. I don't know what went wrong. This is a bread with quite a lot of molasses added to the dough and maybe this was the problem. I am not too fond of breads with molasses, so Anadama and Limpa are off my list. That's ok, plenty of other recipes left.

Then, I made a red been stew with tofu. Failure. I modified the recipe, replacing tempeh with tofu, and half of it ended up in the garbage.

So, this week I was on a mission because I did not want a repeat of last week failures. I decided to buy a  pizza stone and proceeded to test it.

First test, apple pizza. Bingo! The crust came out very thin and crispy, the sugar caramelized on top, and the apricot jam brushed on top added just enough sweetness to complement the cheese. This recipe is definetely a keeper. I was so hungry that I forgot to take a picture before supper...

Then, I made a lentil soup with dried apricots. For the bread of the week, I made pumpernikel and baked it on the pizza stone. Warning! This bread is not for the faint of heart. I never tasted a rye bread with such a strong taste. So this one too is another keeper.

Then, lentil-walnut burgers. And last but not least, muffin/scones/cookies. When I took them out of the oven, melted chocolate oozed  from those "muffcones". I baked them directly on the pizza stone because the dough came out a bit too stiff, that is why I call them muffcones (otherwise known as "genetically engineered" muffins!). They might be ugly, but they are good! I modified the recipe by eliminating the butter and reducing the sugar. I also added more spices, but next time I will add even more cayenne and cardamom. 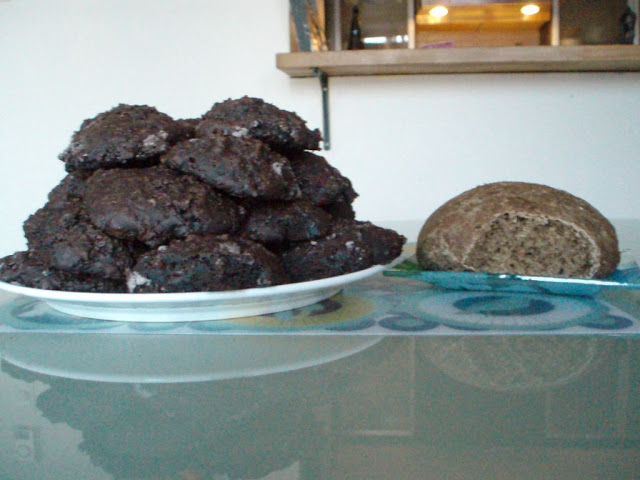 And to top it off, I found a recipe for a cinamon mocha drink in an old O Magazine...My name is Mona and I am a chocoholic!
Posted by Mona at 6:07:00 PM
Email ThisBlogThis!Share to TwitterShare to FacebookShare to Pinterest
Labels: food
Newer Post Older Post Home