There are so many schools in Xela that it took a while to decide, but finally signed up with El mundo en espanol.
This is a small, family run school. Classes are given in the backyard of the school director, Gladis. Her whole family is involved in a way or another. I read somewhere that she pays the teachers and the homestay families a fair wage (which is not always the case) and this was important to me. Their website basically sold the school to me because that was the kind of experience I was looking for. When I signed up, I was not sure if I will live with Gladis and her family or with a different family. Secretly, I was hoping to stay with Gladis because I knew that, with such a big family, there will always be people around to talk to. And guess what ...I stayed with Gladis.

Other members of the family were Mama Chaito, Gladis's two daughters, Gladis's granddaughter, Gladis's sister-in-law Cindy, Cindy's daughter and tio Lionel. In the end, it turned out that tio Lionel was nobody's uncle, but an old family friend that had no place to live and now he lives with Gladis.

There were also a number of friends, relatives, colleagues, teammates etc etc coming in and out all the time. The table at lunch and supper was always full; almost every day there were people I did not know. I spent a lot of time with the family, asking questions about everything starting with cooking and ending with the civil war. It helped that I knew some Spanish already and that I was not afraid to talk, regardless how many mistakes I made. 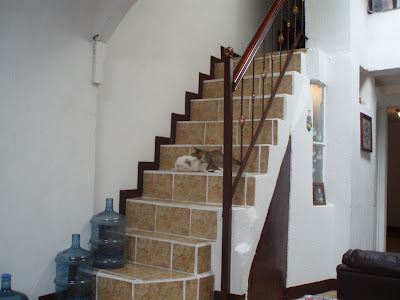 The rabbit thought she was a cat - she drunk cat's milk; she ate cat food ...they were a riot together ...
View from the kitchen door: 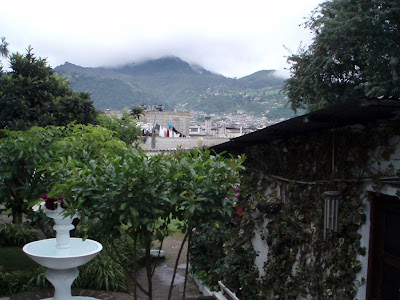 There were few other independent students and a group of medical students from the US. Guess who was the oldest ...and not by few years, by a generation ... I think I have to face the reality. I might be running marathons, but ...
Posted by Mona at 9:17:00 PM
Email ThisBlogThis!Share to TwitterShare to FacebookShare to Pinterest
Labels: travel
Newer Post Older Post Home