I made it in time to the Grand Canyon village to register for the adventure of the summer - the mule ride down to Phantom Ranch. On D-Day, I woke up early, prepared the yellow rain coat identifying me as one of "the chosen ones", filled the water bottle, had a good breakfast and showed up for the briefing. I have to say that all we have been told turned out to be true: by the end of the day we smelled like mules, we were dirty like mules. And did I mention we were sore in places we did now know we had. Some of us (me!) had trouble motivating the mules. Bad idea! Mules have to walk head to tail for security reasons. My fate during these two days was closely knit to that of Big-G: 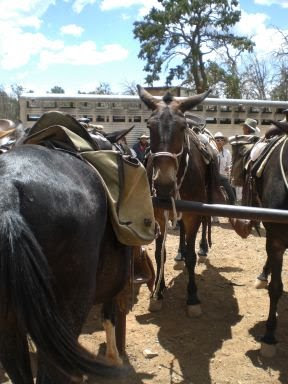 Kevin was our guide. The first 5 min in the saddle were terrible. I had to bite my tongue to not tell them I wanted off the darn animal no matter what! Mules are steadfast, but they are not ballerinas. Big-G seemed to move like somebody who had too many drinks on the rocks, shaking form side to side and on the edge of the precipice. It took a while to find my balance, but once I did, the rest was fun. I wonder on how many cameras I ended up, proud mule-rider! We left late in the morning so by the time we made it to the Indian Gardens, half way down, it was already very hot. We had lunch there and we proceeded in blistering sun and 115f heat. No shade. Hairpin slopes. Sometimes I had the feeling that half of me dangled above the void. Maybe it was just a heat stroke. We finally saw the river, but that did not mean it was the end of the journey. We still had a good hour if not more to reach the second bridge where the mules can cross and then after another 20-30 min, finally get to the ranch. I jumped in the creek - such a blessing on that heat (120F at the ranch).
Amazing how tired and hungry I was considering the heavy work was Big-G's task. We had a hearty supper and went to bed early. Luckily by bed time, the light was back on and the AC was working.

Next morning, back in saddle. Again, left a bit late. South Kaibab trail has absolutely no shade and no water. The trail was not as bad as the day before and we stopped more often to rest the mules. WE made it back around 1 PM or so.

I am hoping to do this again sometime, maybe in the winter. And I want to hike rim to rim too! Not in August though.

The day after, I hiked to the Indian Gardens and back. And that was the end of the adventure. Pictures coming soon.
Posted by Mona at 5:55:00 PM
Email ThisBlogThis!Share to TwitterShare to FacebookShare to Pinterest
Labels: travel
Newer Post Older Post Home